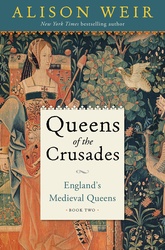 The Plantagenet queens of England played a role in some of the most dramatic events in our history. Crusading queens, queens in rebellion against their king, seductive queens, learned queens, queens in battle—these determined women often broke through medieval constraints to exercise power and influence, for good and sometimes for ill.

This second volume of Alison Weir’s critically acclaimed history of the queens of medieval England now moves into a period of even higher drama, from 1154 to 1291: years of chivalry and courtly love, dynastic ambition, and conflict between church and throne. We see events such as the murder of Becket, the Magna Carta, the birth of parliaments, and even more from an entirely new perspective.