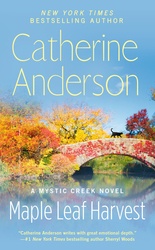 Lane Driscoll has been having nightmares where she’s chased by a strange man. When she has a threatening run-in with someone who looks just like that man, she decides to leave her hometown until she figures out what’s going on. Lane seeks refuge in beautiful Mystic Creek. Soon after she arrives, a handsome customer seems to think he recognizes Lane, but calls her by the wrong name.

When Jonas Sterling encounters his ex-girlfriend, Veneta, in town, he can't believe his eyes. Jonas is even more baffled when it turns out the woman is a total stranger to him. There's no way two people could look so similar without being related. Jonas discovers Lane was adopted at the age of three and is now 26 years old—the same as the woman he dated.