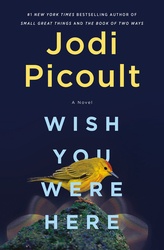 Wish You Were Here

Survival of the loneliest

Diana O’Toole is not engaged just yet, but she knows her boyfriend, Finn, a surgical resident, is about to propose on their romantic getaway to the Galápagos. But then a virus has appeared, and on the eve of their departure, Finn breaks the news: he has to stay behind. You should still go, he assures her.

Almost immediately, Diana’s dream vacation goes awry. Her luggage is lost, the Wi-Fi is nearly nonexistent, and the hotel they’d booked is shut down due to the pandemic.

In the Galápagos Islands, where Darwin’s theory of evolution by natural selection was formed, Diana finds herself examining her relationships, her choices, and herself—and wondering if when she goes home, she too will have evolved into someone completely different.

“Jodi Picoult once again proves she is the master of wading through the darkness to find the light.”—Taylor Jenkins Reid