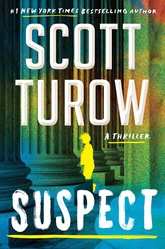 Police Chief Lucia Gomez has maintained a spotless reputation—until now. Three male police officers have accused her of soliciting sex in exchange for promotions. Chief Gomez turns to an old friend, Rik Dudek, to act as her attorney.

“Pinky” Granum spent most of her youth failing out of various professions, including the police academy. But, she finally has a respectable-enough job as a licensed P.I. working for Rik. Rik and Pinky feel that Chief Gomez’s case is their chance to break into the legal big leagues.

Guided by her gut instinct and razor-sharp investigative skills, Pinky dives headfirst into a twisted scandal that will draw her into the deepest recesses of the city’s criminal networks, as well as the human mind.

One of the major writers in America."―NPR