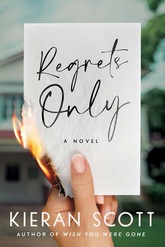 Did she fall? Or was she pushed?

Paige Lancaster has returned to the East Coast from her prestigious, well-paid job in Los Angeles, writing for the smartest detective series on television. Something terrible happened to her back in Hollywood. Okay, two terrible things, one featuring a misplaced tire iron--and now she’s broke, homeless, and living with her widowed mother and eight-year-old daughter, Izzy, in her Connecticut hometown.

Then she shows up at the annual Parents and Pinot fundraiser, held at Ainsley and John Anderson’s dazzling mansion, where she accidentally destroys the guest bathroom, overhears an incriminating conversation, and discovers that her purse has gone missing. And later that night, Ainsley turns up dead at the bottom of her own driveway…