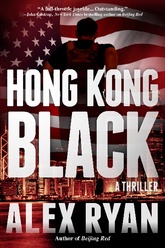 When American CIA operative Peter Yu's mutilated body washes up on a beach near Hong Kong, along with dozens of others, former Navy SEAL Nick Foley is embroiled in a bioterrorism investigation conducted by China's elite Snow Leopard unit and the Chinese CDC, this time involving illegally harvested organs.

But after thwarting an attempt on his life, Nick is forced to go off the grid. He enlists the help of tough, beautiful CDC microbiologist Dr. Chen Dazhong to help unmask his would-be killer. On the run, their budding relationship is tested at every turn.

With each step, Nick and "Dash" plunge deeper into a global conspiracy that began over two thousand years ago with the First Emperor of China and now threatens the world.

"A fast-moving, tense biothriller.... A terrific tale for fans of the genre."--Kirkus Reviews on Beijing Red

"Hopefully this first novel to feature ex-Navy SEAL Nick Foley is only the beginning of a long series."--Booklist on Beijing Red

"Another compelling thriller of an action/adventure novel from the pen of a true master of the genre."--Midwest Book Review on Beijing Red

"Smart and entertaining, a timely tale built around a resilient hero."--Kansas City Star on Beijing Red