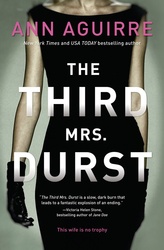 Is three her lucky number?

"The Third Mrs. Durst is a slow, dark burn that leads to a fantastic explosion of an ending."―Victoria Helen Stone, bestselling author of Jane Doe

Marlena Altizer Durst lives in her husband's shadow. He controls her every move―what she wears, the food she eats, and the friends she's allowed to make. If she disobeys, there are...consequences. And he has all the power.

To outsiders, it seems that she leads a fairy-tale life. But nobody ever wonders if Cinderella was happy after she married the prince. Marlena has traded freedom and safety for luxurious imprisonment, and most days, that seems like a bad bargain. Death may be the only exit. Just like his first wife. And his second. Unless she flips the script.

"The ultimate duel: a humming, intelligent woman versus a violent husband who believes that he is the strongest one in the relationship. This is one you must 'see' with your own eyes. It's an experience you won't forget."―Suspense Magazine