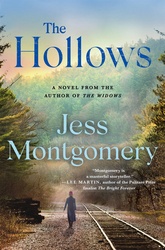 Jess Montgomery showcases her skills as a storyteller in The Hollows: a powerful, big-hearted and exquisitely written follow-up to her highly acclaimed debut The Widows.

Ohio, 1926: For many years, the railroad track in Moonvale Tunnel has been used as a shortcut through the Appalachian hills. When an elderly woman is killed walking along the tracks, the brakeman tells tales of seeing a ghostly female figure dressed all in white.

Newly elected Sheriff Lily Ross is called on to the case to dispel the myths. With the help of her friends Marvena Whitcomb and Hildy Cooper, Lily follows the woman’s trail to The Hollows―a notorious asylum―and they begin to expose dark secrets long-hidden by time and the mountains.

"A skillfully told murder mystery that features a rich array of characters and a sophisticated portrayal of a small town grappling with its own racist past and ongoing conflicted present."―Kirkus

“Realistic characters complement a great sense of place. Montgomery does an admirable job of portraying brave women such as Lily who must become the support of their families in the face of their own grief after their husbands’ deaths.”―Publisher’s Weekly