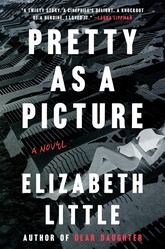 Pretty As a Picture

Marissa Dahl, a shy but successful film editor, travels to a small island off the coast of Delaware to work with the legendary—and legendarily demanding—director Tony Rees on a feature film with a familiar logline.

But she soon discovers that on this set, nothing is as it's supposed to be—or as it seems. There are rumors of accidents and indiscretions, of burgeoning scandals and perilous schemes. Then she meets the intrepid and incorrigible teenage girls who are determined to solve the real-life murder that is the movie's central subject, and before long, Marissa is drawn into the investigation herself.

The only problem is, the killer may still be on the loose. And he might not be finished.

“[A] smart, cinematically steeped page-turner. . . . Little scores with the achingly vulnerable Marissa, whose specific set of skills enables her to see the big picture before anyone else. Psychological thriller fans will be well satisfied.”—Publishers Weekly