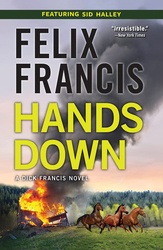 Can Sid give a helping hand?

After receiving death threats, an ex-jockey trainer friend calls Sid Halley, a private investigator, to ask for his help, but Sid has his own problems to deal with; like recovering from surgery and saving his crumbling marriage.

When his friend’s stable yard is torched, horses killed, and the friend is found dead, Sid can only blame himself for not helping sooner. The police think it’s suicide, but Sid is not convinced after his friend’s terrified phone calls. Heavy with a guilty heart, Sid starts to investigate and soon finds himself embroiled in a conspiracy that cuts to the very heart of the integrity of British horse racing.

Can Sid figure out what happened to his friend, or will he be the next one that the killer targets?

“The master of suspense and intrigue” —Country Life