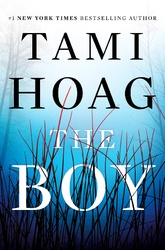 Det. Nick Fourcade enters Genevieve Gauthier’s Louisiana home to find a bloody, brutal and confusing crime scene. Genevieve’s seven-year-old son, KJ, has been murdered by an alleged intruder, yet Genevieve is alive and well. There is no evidence of forced entry, not a clue to a motive. Meanwhile, Nick’s wife, Det. Annie Broussard, is troubled by a story that makes little sense. Who would murder a child and leave the only witness alive?

When KJ’s babysitter, 12-year-old Nora Florette, is reported missing the next day, the town fears a maniac is preying on their children. With pressure from a tough new sheriff, media, and parents, Nick and Annie dig deep into Genevieve’s past as a convicted criminal. Could she have killed her own child?

“Tami Hoag continues to set the standard for excellence in her genre.”—Suspense Magazine