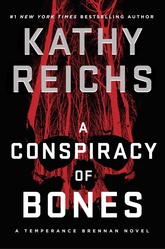 A Conspiracy of Bones

Texts from a dead man

It’s sweltering in Charlotte, North Carolina, and Temperance Brennan, still recovering from neurosurgery following an aneurysm, is battling nightmares, migraines, and what she thinks might be hallucinations when she receives a series of mysterious text messages, each containing a new picture of a corpse that is missing its face and hands. Immediately, she’s anxious to know who the dead man is, and why the images were sent to her.

To win answers, including the man’s identity, she must go rogue, working mostly outside the system. That’s because Tempe’s new boss holds a fierce grudge against her and is determined to keep her out of the case. Tempe bulls forward anyway, even as she begins questioning her instincts.

“Nobody writes a more imaginative thriller than Kathy Reichs or crafts a better sentence. Her latest forensic investigation, A Conspiracy of Bones, rivets with its non-stop pursuit of some of the vilest villains ever.” —Clive Cussler